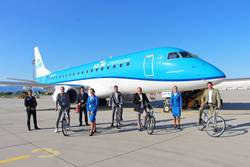 Graz Airport has been connected to Amsterdam again since yesterday evening and therefore to numerous other important destinations.

Feldkirchen/Graz, 17.06 2021: The flight connection to Amsterdam was still offered from Graz last autumn/winter but then finally had to be suspended due to the COVID-19 pandemic. Now KLM is flying 6 times a week to the capital of the Netherlands again and therefore us to one of the most important transfer airports in Europe.

Finance and Investment City Councillor Dr Günter Riegler: “Graz Airport has opened its doors to the world a little bit more with the resumption of air traffic to Amsterdam. For the many large companies and groups of companies based in Graz, air traffic between European cities is urgently needed. This secures jobs in Graz in these challenging times and maintains our competitiveness with other competing regions.”

“Our airport is back on the runway after the unintentional stopover. We haven't taken off yet and we're certainly not in a climb but the buoyancy is steadily increasing,” CEO Wolfgang Malik, Chairman of the Board and an active pilot himself says in aviation parlance, pleased about the next resumption of a proven scheduled destination. “For a mobility hub like Graz, connections to the popular hubs are necessary to offer the best, direct journeys to the world for business and tourism. I am particularly pleased for all our passengers from the south of Austria and the north of Slovenia that KLM is now linking Graz with the good transatlantic flight offers again.”

“Lively Amsterdam and its surroundings are always an attractive city break destination in themselves,” explains Wolfgang Grimus, Managing Director of Graz Airport, “but for tourism and business, the numerous connecting flights all over the world are of particular importance.”

The flight from Graz to Amsterdam opens up a wide range of onward flight options for passengers from Graz. In Europe, for example, these are destinations such as London, Edinburgh, Manchester, Birmingham, Glasgow, Lisbon, Madrid, Barcelona, Stockholm, Helsinki, Oslo and Gothenburg, and in the long-haul sector Atlanta and from there to the whole of the USA, Canada and South and Central America.

The flights will be offered at different times until the end of June. From the end of June, planes will take off from Graz at 2.00 p.m. and arrive in Graz at 1.30 p.m.

For the time being, Graz is connected to 4 destinations again in the scheduled sector, namely Vienna, Frankfurt, Düsseldorf and Amsterdam. Since yesterday and/or today, holiday air traffic is now also flying to Heraklion and Rhodes, alongside Paros, Naxos and Skiathos. Many more destinations will follow in the coming weeks.