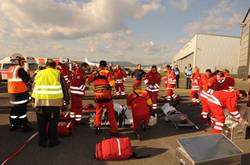 Feldkirchen bei Graz, 14 October 2011: Smoke rises into the sky, an office container is ablaze. Baggage is strewn around an airliner (dummy). The fire service, ambulance and army are all full at work putting out fires, saving lives, assessing the situation – round and about injured people stand or sit as they wait for care. The good news: It’s all only part of a hard day’s training.

This is serious training, as serious as saving lives! Graz Airport holds regular drills to keep top fit for dealing with any potential disaster. These drills have become bigger, more complex and realistic over the years and each one brings new knowledge and the will to face even greater challenges.
“We have a major emergency drill at Graz Airport at least once every two years. But anyone who thinks it has all become pure routine could not be further from the truth. Each drill is different. Moreover dealing with all the many challenges and problems that arise during the exercise is totally demanding and keeps each man and woman involved constantly on their toes physically and mentally”, Gerhard Widmann, CEO of Graz Airport said.

The team of 300 included not only of airport staff, but also the emergency services, the army, the crisis intervention team, the Styrian Warning Center, and the head office of the Graz regional administration. All team members were put to the test not only in tackling their own demanding tasks, but also in dealing with alarms, communicating and working together to perfection with all the other services and in seeing exactly where any weaknesses occur in the organisation that must be then be completely ironed out.

“Every emergency drill brings improvement potentials to light”, Hubert Jandl, airport operations manager for Airside Management and Cargo said. “Very often it is the smallest details that cause big problems. These are clearly recognised in our drill and we immediately work together on changing them. We can then see at the next drill if our improvement work was right. Striving to get better is in fact, the main purpose behind the drills.”
Good cooperation, communication and trust among all the groups involved are the keys to success in achieving the best and most reliable disaster control.

The scenario:
An aircraft collides with a flock of birds on take-off and a chain reaction is the result. The engines fail, an emergency landing follows and an office container on the ground that is used by 10 people is struck and bursts into flames. The aircraft breaks apart, injuring passengers and people in the container. The luggage – including radio-active freight – is damaged and much of it is strewn over a wide area. This is a major challenge for everyone involved.


The drill objective:
The purpose of this comprehensive drill is to check: