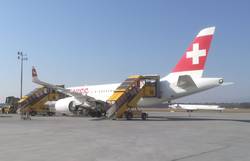 Feldkirchen/Graz, 28.03.2022. With the start of the summer flight schedule, travellers can once again also fly from Graz to Zurich, and thus to another major hub in the heart of Europe. Initially there will be flights twice a week, on Mondays and Fridays, or in certain periods on Thursdays.

“Alongside Frankfurt, Vienna, Amsterdam and Munich, we are now offering a fifth major hub in the form of Zurich,” says Wolfgang Grimus, Managing Director of Graz Airport. “This means that within the worldwide network of the Lufthansa Group, our passengers will be able to adapt their journeys even more flexibly to their needs.”

At its home hub in Zurich, SWISS offers its passengers connections to North and South America, South Africa and the Middle East, among other destinations.

The flights will be operated by SWISS using Airbus A220-100/A220-300 aircraft, and by Helvetic Airways on behalf of SWISS using Embraer E190-E2/E195-E2 aircraft. Through the use of state-of-the-art technology in their engines, systems and materials, these new aircraft types set new standards in terms of economic efficiency and environment-friendliness. The fuel consumption is up to a quarter lower compared to similar aircraft. Thanks to innovations in the cabin design, the passengers can look forward to substantially increased travel comfort, and the new aircraft are also only around half as loud to the human ear.

Zurich itself is worth a city break at any time. The old town, crowned by the Grossmünster church, offers many spots of historic interest, as well as fine shops, cafes and restaurants (the culinary highlights extend far beyond chocolate and cheese!). Lake Zurich is a treat not just for water-lovers, while summiteers can enjoy the best view of the city, the lakes and the