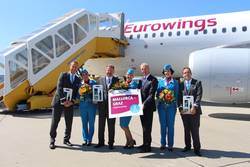 With Eurowings from Graz to Mallorca

The quality low-cost carrier now connects Styria with the island by twice-weekly direct service. Next to Vienna, Salzburg and Linz, Graz now supplements the Austrian destinations offered by the Lufthansa subsidiary based on the Spanish holiday island.

COLOGNE/BONN, GRAZ, July 6, 2017 – With Eurowings non-stop to the most popular holiday island: As of now, the Lufthansa Group’s quality low-cost carrier offers direct service between Mallorca and the Styrian capital. In addition to Vienna, Salzburg and Linz, Austria's second largest city is now the fourth destination with direct Eurowings service to the Spanish holiday island. The airline operates its service between Graz and Palma on Thursdays and Sundays using an Airbus A320.

Tickets can be booked, for example, on the internet at www.eurowings.com or through the Eurowings app. Travel agent Eurowings Holidays also offers low-cost package holidays from Graz with the new route. Packages can be booked online on its website.

It was only at the end of May that Eurowings opened its own base on Mallorca, completed the stationing of its first four aircraft on the island and at the same time announced that two more Airbus A320 aircraft would be stationed on Mallorca as soon as possible. This allows the quality low-cost carrier to fly to a large range of destinations in Austria and Germany: The airline now connects more than 20 airports in both countries with the island and offers 6,000 flights a year to Mallorca and back. It expects to welcome more than one million passengers per year on these routes. With the base at Palma airport, Eurowings has opened its first office in a non-German speaking country.

The demand for flights to Mallorca, the island in the sun, is booming. Last year already, the airline had brought a record number of tourists from Germany and Austria to their destinations, and the sun island is again set to break its previous record in 2017. "Palma is the most booked of the Eurowings destinations," says Eurowings CEO Oliver Wagner. In the peak season, during the summer holidays, Eurowings offers almost 300 flights a week between German or Austrian airports and Mallorca. "At times, we even use an Airbus A330 that can carry more than 300 passengers and is otherwise used for long-haul flights, to fly to this destination."

"For years, Mallorca has been one of the most popular holiday destinations of our passengers," explains Mag. Gerhard Widmann, Managing Director of Graz Airport. "We are therefore delighted that we can now for the first time offer twice-weekly, regular non-stop service with Eurowings to the largest Balearic Island, departing from Graz Airport.