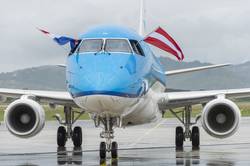 The daily direct service was started this morning.

Feldkirchen near Graz, 15. 05: 2016: As scheduled, the first KLM flight left Amsterdam today with destination Graz. Just after 11:00 am, the aircraft was welcomed in Graz in a ceremony with salute by the fire brigade, a water fountain, and in the presence of approximately 100 invited guests from politics, business, industry and tourism.

"We at KLM are extremely pleased that we can celebrate the successful start of the new connection between Graz and Amsterdam today. It is our hope and desire, that the new flights to Amsterdam and the transfer options offered in Schiphol will benefit the people and businesses in Styria," said Guido Hackl, Air France KLM Delta Country Manager Austria.

The service to Amsterdam is offered once a day, seven days a week. KLM uses an Embraer 175 aircraft with a maximum of 88 seats.

The new KLM flights not only provide a perfect connection to Amsterdam or the Netherlands, they also offer ideal onward connections from Graz through Amsterdam. The flight schedule from Graz allows the Styrian economy to be ideally connected to the international and/or intercontinental network of KLM and DELTA Airlines.
The European destinations of KLM via Amsterdam comprise, for example, Paris, the UK, Scandinavia, France; long-haul flights offer services to the major hubs of DELTA Airlines in the USA such as Detroit, Atlanta, Minneapolis and New York, and from there to the continental USA, Canada and Mexico. In addition, well-timed connections to Asia are also available, in particular to Beijing, Shanghai, Seoul, Tokyo.

Governor MMag.a Barbara Eibinger-Miedl: "For an exporting country such as Styria, traffic connections are of vital importance. The new direct service between Graz and Amsterdam will strengthen Graz Airport and provides a positive signal for the Styrian economy in general. The connection to Amsterdam improves the accessibility of important future markets. Our export-oriented companies will benefit from it. At the same time, the Netherlands are an interesting market for our tourism industry and new opportunities are opening up here as well!"

Mayor Mag. Siegfried Nagl: "I would like to thank and congratulate the management team of Graz Airport on the occasion of today's first flight by KLM Royal Dutch Airlines to Graz. With the new daily service to Amsterdam, one of the five largest European airport hubs, the people of Graz and Graz-based companies will benefit from the economic and tourist attractiveness of the Dutch metropolis. The cooperation with KLM represents another important milestone in strengthening Graz Airport as a highly attractive and future-oriented regional airport. "

Amsterdam's Schiphol Airport is located 15 kilometres southwest of the Dutch capital and 3–5 metres below sea level, making it the lowest airport in the world! The airport has been acknowledged for its good service by passengers for many years, and has already received several awards.

DI Wolfgang Malik, Chairman of the Management Board of Holding Graz – Kommunale Dienstleistungen GmbH: "The example of the new service to Amsterdam demonstrates once again the target- oriented manner with which the owners and Graz Airport operate. Together with the new service to Birmingham, the KLM flights to the Netherlands are another milestone for our international airport.“

"Today's start of the flight service between Amsterdam and Graz opens up a wide range of new travelling options for our passengers," explains Mag. Gerhard Widmann, Managing Director of Graz Airport. "I am convinced that the new connection will not only be an important milestone for Graz Airport, it will also further stimulate our economy and tourism industry!" 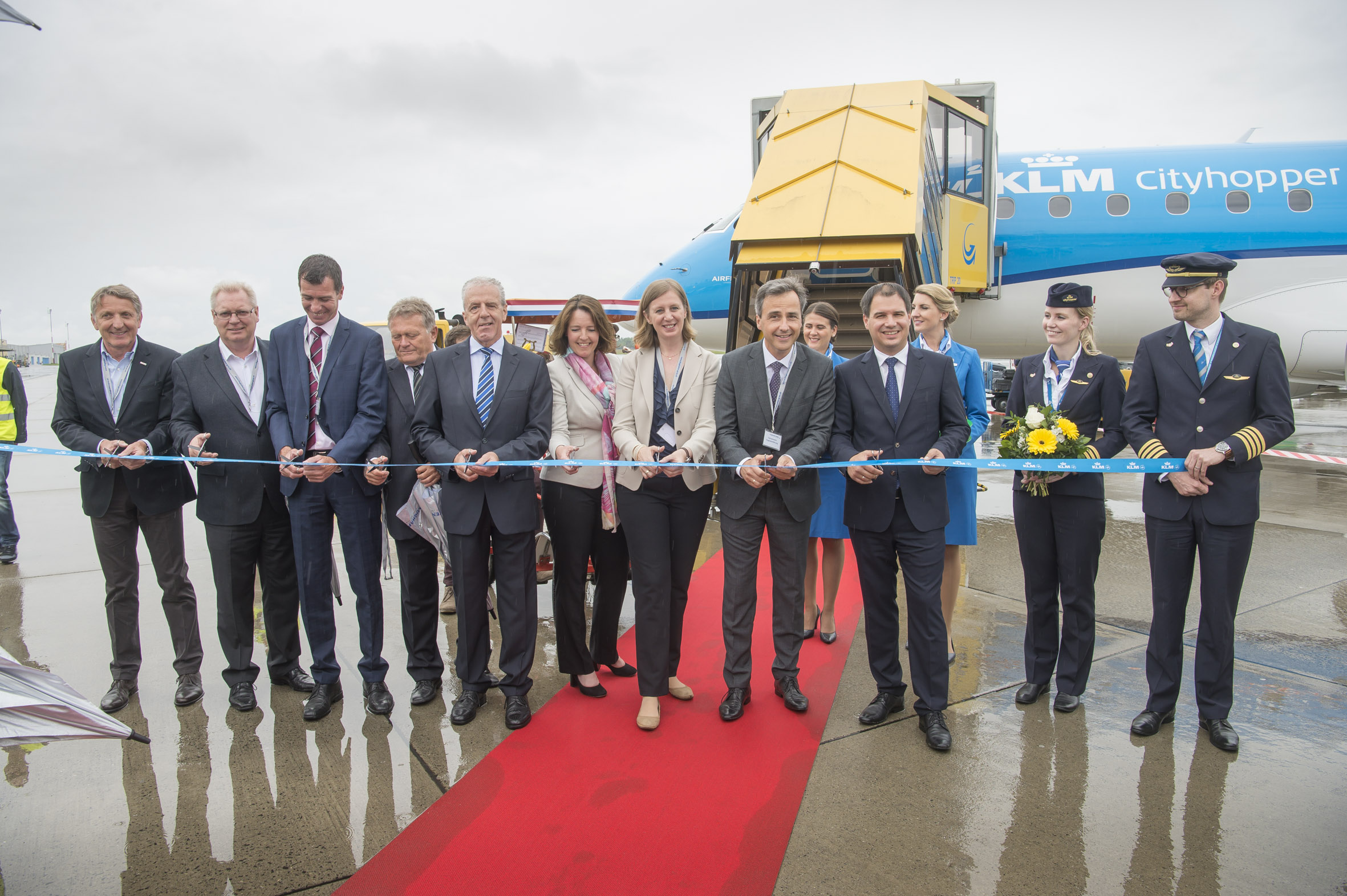 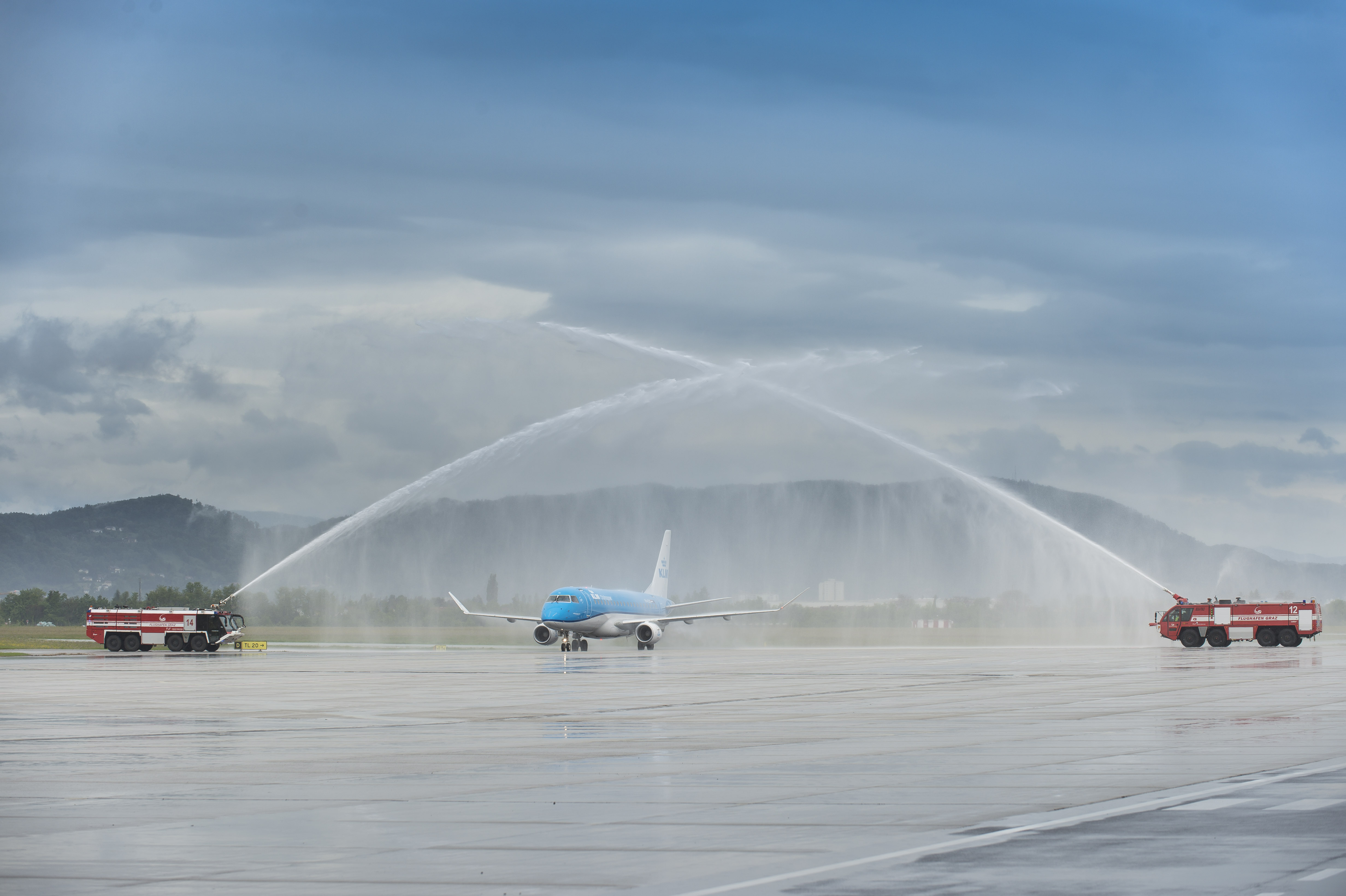 © Photo Fischer/Graz Airport, Arrival of the aircraft and salute by the fire brigade.