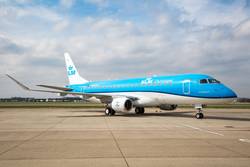 The connection to Amsterdam kicks off on 15 May 2017 with one flight a day.

Feldkirchen bei Graz, 15/12/2016: KLM lands at Graz Airport. This is not just another new airline with a new destination, for passengers at Graz Airport it above all means access to another major European transfer airport and to the third airline alliance – SkyTeam!

“At KLM we are of course delighted to be able to offer our customers a connection from Graz to Amsterdam and thus to the whole world”, says Guido Hackl, Air France KLM Delta Country Manager Austria. “We have been observing this connection for some time but in the end it was the excellent cooperation with Graz Airport and the commitment of the Styria business world to lending the best possible support to this connection that were deciding factors for starting in summer 2017. Travel agencies in Graz and Styria also promised us their full support, which is why we are very confident that this new route will meet all expectations.
In the months to come, we and our partners will do everything to make the start in May a success.”

The connection to Amsterdam will be flown once a day, seven days a week. The plane will be an Embraer 175 with a maximum of 88 seats.
KLM is an important partner in the SkyTeam airline alliance, that also includes Air France, Transavia, Aeroflot, Alitalia or Delta Airlines, among others. KLM served around 145 destinations around the world in summer 2016, of which 68 were long hauls and 77 medium hauls.

Provincial Councillor for Economic Affairs Christian Buchmann: “KLM is the next carrier to fly to Graz. This is a highly positive signal for Styria and is a valuable addition to Graz Airport as a regional hub. The direct connection from Graz to Amsterdam means improved access to major markets of the future. This not only benefits our exporting firms but also Styria as a tourist region!”

Amsterdam airport, “Luchthaven Schiphol”, counts among the biggest in Europe and offers numerous flights to a wide range of European and international destinations. It is situated roughly 10km outside Amsterdam and has ideal connections to the motorway and the European high-speed rail network.

The Mayor Siegfried Nagl: “My thanks and congratulations on today’s contractual agreement with KLM Royal Dutch Airlines are due to the management team of Graz Airport. Thanks to the new daily connection to Amsterdam, one of the five biggest aviation hubs in Europe, the residents of Graz as well as companies based here will be able to benefit from the great appeal of the Dutch metropolis for business and tourism. The cooperation with KLM is another major milestone in strengthening Graz Airport as a highly attractive and forward-looking regional airport.”

Amsterdam, the capital of the Netherlands, is famous above all for its canals, that have been listed as UNESCO world heritage, its many unique museums, including the Rijksmuseum and Anne Frank Museum or the house where Rembrandt was born. A timeless favourite for photographers is the beautiful age-old architecture characterised by the fact that Amsterdam was built on some five million wooden piles.

“Starting in May, passengers at Graz Airport will be able to take advantage of a direct flight to yet another major European metropolis. Around 60,000,000 passengers already use this north European hub every year, and now Graz is set to join them”, Wolfgang Malik, Chairman of the Board of Holding Graz is pleased to announce. “I would like to congratulate the team of Graz Airport on their consistent work in connecting further destinations to Graz. This helps secure our business location in the south of Austria and is also a quality-of-life enhancement for people living in Graz.”

“After Star Alliance and One World, Graz Airport is now connected to the third major airline alliance. SkyTeam opens up a host of new possibilities and opportunities for all passengers – no matter whether they are travelling on business or as tourists”, explains Gerhard Widmann, Managing Director of Graz Airport.

The flights are available for booking at https://www.klm.com/home/at/de.