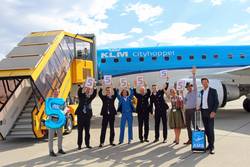 KLM celebrates the 5th anniversary of the Graz-Amsterdam route

Since May 2017 passengers from Graz Airport have not only been connected with the world via a further major hub, but also with another air travel alliance, the Sky Team.

On 15 May 2017 KLM launched the air traffic route between Graz and Amsterdam, which is the third-largest airport in Europe and the hub for flights all over the world. Via Amsterdam, travellers from Styria can conveniently reach 167 international destinations. In summer 2022 KLM is flying from GRZ to AMS 5-7 times a week, and offers an excellent choice of worldwide destinations for both business and leisure trips.

KLM and Graz Airport are delighted at the 5th anniversary of the route between Graz and Amsterdam and the fact that Graz (Styria) continues to be successfully integrated into the international route network. 5-7 times a week, KLM flies air travellers from Styria all over the world via AMS, to a total of 167 destinations, 96 of which are European and 71 intercontinental.
The GRZ-AMS flight connection is operated by KLM with an Embraer 175. This offers a capacity of 20 seats in Business Class, eight seats in the Economy Comfort Zone and 60 seats in Economy Class.

Guido Hackl, Country Sales Manager AIR FRANCE KLM Austria, Czech Republic and Slovakia: “The demand for air travel is increasing, as the Covid-19 restrictions in the Netherlands and other EU countries have been lifted. KLM has responded to this by extending its capacity on European routes by 10% compared to last year, which is almost the equivalent of the level in 2019 before the pandemic. KLM has increased the capacity on its intercontinental routes by 17% compared to last year as a response to an increasing booking trend. This summer, flights will be offered daily to Aruba, Bonaire and Curaçao, and during the summer holiday period the frequency to Curaçao is being increased to twice daily. Port of Spain, KLM’s new tropical destination in the winter flight schedule, is also included in the summer flight schedule, and offers customers flights three times a week between Amsterdam and the capital of Trinidad and Tobago.
Since the USA relaxed its travel restrictions in November 2021, the demand for flights has increased continuously. KLM’s capacity to the USA this summer corresponds to the level in 2019. The resumption of flights to Salt Lake City and the new inclusion of Austin in the route network means that this summer KLM will be offering direct flights to 12 USA destinations, the highest number ever. Austin, the state capital of Texas, is a flourishing technology centre, and a large number of technology companies are based there. Austin is also a blossoming student city with a buzzing nightlife, the Formula 1 and the major South by Southwest Annual Festival (SXSW). KLM is operating three flights a week to Austin.“

Holding Graz CEO Wolfgang Malik: “I am very pleased that today we can look back on five successful years of KLM at Graz Airport. The flights are not only the perfect connection to Amsterdam or the Netherlands, but also offer ideal connection options worldwide from Graz. For an export region such as Styria, traffic connections are crucially important, and the direct flight strengthens Graz Airport while also making important future markets more accessible for companies”.

Wolfgang Grimus and Jürgen Löschnig, Managing Directors of Graz Airport: “Our passengers – whether business travellers or holiday makers – value KLM’s worldwide route network and the efficient hub Schiphol. Amsterdam is an attractive and worthwhile destination for city breaks at any time of year, and the Dutch appreciate the short flight they can take to explore the tourist highlights of Graz and Styria, and transform the Red Bull Ring in Spielberg into a sea of orange flags during the Formula 1 weekend.”