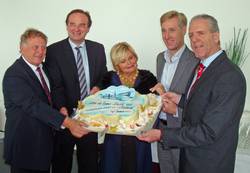 As announced a few weeks ago, the regional InterSky airline is significantly expanding its services in Styria. As from January 2013, InterSky will offer daily flights between Graz and Zurich with two flights in the morning and evening, plus one daily flight between Graz and Milan (Bergamo). The flights from Milan will depart in the early afternoon. Daily morning flights will also connect Friedrichshafen and Graz, a link that businesses in the Lake Constance area have been demanding for years. The proven Dash8-300Q with 50 seats will be used on all flights.

These many new flights from Graz mean a significant increase in the activities of the regional InterSky airline in Austria. Peter Oncken, Managing Director of InterSky: “We were in negotiations with Graz Airport for quite some time over the expansion of our flight network as from summer 2013.”

Roger Hohl, Manager Sales & Marketing at InterSky: “The advance bookings for the Graz-Zurich connection have been developing nicely in the first few weeks. The new morning/evening connection between Friedrichshafen and Graz is particularly popular with business travellers. Bookings for the new flight connection between Graz and Milan could be better, but we were aware that a completely new connection would take a little longer to be rooted in people’s awareness and to be accepted by the market. By adding new flights in Styria, InterSky is increasing its flight programme by a strong 38% compared to last year.”

Renate Moser, founder and managing partner of InterSky said: “It is a great pleasure for me to step up our services in Styria so significantly. In order to ensure smooth introduction of the new flight connections, to offer them permanently and to manage them in an economically sustainable manner, local businesses, regional authorities and tourism are now called upon to cooperate closely with us.”

Gerhard Widmann, CEO of Graz Airport: “It is one of our primary objectives to increase the number of scheduled flights to the large transfer hubs of Central Europe and to destinations that are appealing to both business travellers and tourists alike. Aviation is currently going through a rough patch, and against this background the business commitment of InterSky is greatly valued.”

Wolfgang Malik, Chairman of the Board of Holding Graz: “With these additional InterSky flights, Graz Airport will offer some 100 flights (!) per week to the important transfer hubs of Zurich, Frankfurt, Vienna, Munich and Berlin as from January 2013. I am proud of this development and happy that an Austrian regional carrier has the courage and power that it takes to embark on new routes.”

Georg Bliem, CEO Steiermark Tourismus is pleased: “Switzerland is a promising market for Styria in which we place high hopes; we think that it will be our spas, Styrian wine, the city of Graz and business that will attract Swiss guests. To date, journeys to Graz took a very long time and the new, favourably priced InterSky flights make coming to Graz much easier. And since we are continuing our successful marketing in Italy, especially in the area of Milan and Bergamo, we are very happy about the new flight offered to Milan.”

Dieter Hardt-Stremayr, CEO Graz Tourismus: “The destinations served by InterSky have always been on our wish list. Now it is up to us to prove that these connections can work in the long term. We look forward to doing that!”

Hans Rudolf Wöhrl, CEO of the INTRO Group (holding 48% of the shares in InterSky) on regional air transport: “Independent regional air transport was somewhat marginalized in the past decade. For one, because many big carriers tried to gain a foothold in this market segment, and secondly because low-cost airlines wanted to solidify their presence also in the provinces. However, now the development has gained new momentum because for Lufthansa and other big airlines the operation of aircraft with fewer than 100 seats only makes sense from an economic point of view if such flights go to their own hubs so that as many passengers as possible can continue on the long-distance flights. Another reason is that even low-cost carriers are no longer able to fill their large aircraft everywhere. We were pioneers in regional air transport, when NFD – Eurowings started in 1980, but then we withdrew from the market for some time. After we had restored profitability of dba, gexx and LTU and sold them to Airberlin, we are now happy and enthusiastic to return to the place of our great early success. InterSky is a small but excellent airline with a highly motivated team. Working for InterSky and flying with this airline is fun!”