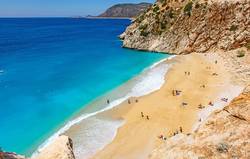 Choice of 9 scheduled destinations, around 15 charter destinations which will be offered for several months, plus many interesting individual flights and short links.

Feldkirchen/Graz, 16.03.2022: 27 March sees the start of the summer flight schedule at Graz Airport, which will offer a colourful and varied flight programme for people who are fond of travel or seeking recreation. New scheduled flights include the Turkish capital Ankara. In terms of charter flights, after a break Burgas on the Bulgarian Black Sea coast (from July to September) and Catania on Sicily (special flights at the end of May/start of July) will once again be offered among other locations.

“Now that many countries are increasingly simplifying travel by withdrawing travel restrictions, together with the tour operators and airlines we are looking optimistically towards the summer,” said Wolfgang Grimus, Managing Director of Graz Airport. “We have succeeded in putting together a varied selection of destinations from Graz which leave almost nothing to be desired!”

Charter links:
During the summer months, flights will be offered at least once a week to around 15 holiday destinations. These include evergreens such as Hurghada (2 x per week), Antalya (2 x per week), Brac, Rhodes and Heraklion (each 4 x per week), Kos or Corfu, but also niche destinations such as Karpathos, Paros, Skiathos, Zakynthos and Calvi. Back again after a long break: Burgas on the Black Sea, which already had many fans before the pandemic as an attractive, value-for-money location.
By the way Gran Canaria, which will be also offered from Graz throughout the winter, is still included in the schedule until 27 April.

Short links and special flights
Mainly around the public holidays in May/June and in the autumn, there will be numerous special flights and short links to attractive destinations such as Valencia, Catania, Funchal, Larnaca, Lisbon or Sevilla.

Schedules flights
On Thursdays and Sundays, you can be on Majorca in around 2 hours’ flying time with Eurowings. If you are hankering more after a city trip or a long-distance flight, you can also reach the big wide world with connecting flights via the major hubs Amsterdam, Frankfurt, Munich, Vienna and Zurich. Also on the schedule: Stuttgart and Düsseldorf.
New this summer: from the end of June to the beginning of October, up to three weekly scheduled flights will be offered to Ankara with Anadolujet, a subsidiary of Turkish Airlines, and with Corendon. These are recommended simply as a city trip to the Turkish capital, or as an interesting stopover, for example en route to the Mediterranean or the Black Sea, or to Istanbul. Aircraft take off almost hourly from Ankara to the two international airports, Istanbul Airport and Istanbul Sabiha Gökçen.

Details of the winter and summer flight schedule: www.flughafen-graz.at