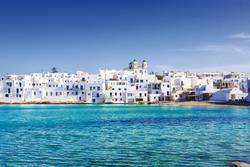 Graz airport: The summer flight schedule is to start with the beginning of summer time

The flight schedule is to include more than 50 flight destinations, amongst these also new ones.

Feldkirchen near Graz, 2017-03-23: On Sunday 26th March 2017, the summer flight schedule will start – a clear sign that a holiday will then already be within reach for many! Quite a number of dream destinations can be selected from over 50 destinations, amongst them quite a few new ones. And then of course we have the approximately 140 weekly scheduled flights in our plan, of which many go to big transfer airports and thus bring the big wide world one step closer.

"It is important to us to constantly be able to offer new destinations", says Mag. Gerhard Widmann, Managing Director of Graz airport. "With Amsterdam and Birmingham in the scheduled flights and Paros and Marsa Alam in the holiday flight sector, we have even been able to obtain destinations which are of interest for people with many different tastes".

Relax your soul; discover new things; enjoy your leisure time!
Amongst the more than 50 destinations in the summer flight schedule, there are of course a particularly large amount promising sun, beach and sea. New in the holiday flight sector are the weekly direct flights to the beautiful Cycladic island of Paros, which will take place from the end of May. Also new to the flight schedule is Marsa Alam on the Red Sea, which is mainly, but not only, popular with divers and snorkelers due to the treasures which can be found under the water. Greece is top of the league regarding flight destinations - namely 10 destinations to 9 islands. But also destinations in Spain, Italy, Croatia, Turkey, Egypt or Bulgaria have been regularly scheduled. This year, two airlines will be flying to Majorca, NIKI and Eurowings. And then there are numerous short chain flights, city and special flights, such as to Bari, Kerry, Glasgow, Menorca, Tirana, Naples or Porto.

On a scheduled flight right around the world? Why not?
The good scheduled flight network is an important basis for Graz airport and its flight guests. Above all, the numerous flights to the big transfer airports Frankfurt, Munich, Vienna, Berlin, Istanbul and Zurich are of tremendous value. From 15th May, KLM will also fly daily from Graz to Amsterdam. The capital city of the Netherlands with its many tourist attractions is a popular city destination. Amsterdam airport is also one of the largest airports in Europe, the base for KLM and therefore, as a transfer airport, of great importance for diverse medium and long-haul flights. Another new scheduled flight destination is Birmingham. Since the end of February, the airline bmi regional has flown four times per week from Graz to the Midlands region. Birmingham is an interesting flight destination in itself; a stay there can also be combined with visits to London, Manchester or Liverpool as there are frequent and fast train connections available in these metropolises. Also contained in the summer flight schedule are of course the flights to Stuttgart and Düsseldorf, which are particularly popular with businesspeople.

You can find information on the flight schedule, flight times etc. here:
http://www.flughafen-graz.at/flug/flug-reiseinfo/sommerflugplan.html

Overview of the summer flight schedule 2017 for Graz Airport: