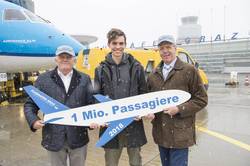 By the end of the year, the Airport will have achieved its best ever result.

Feldkirchen bei Graz, December 14, 2018: Punctually at 1:32 pm today, the KLM flight from Amsterdam landed at Graz Airport carrying the millionth passenger of the year. Wolfgang Malik and Gerhard Widmann gave Benjamin Krause, who was returning home from Calgary via Amsterdam, a warm welcome.

"The daily KLM flight between Graz and Amsterdam has developed very well in the 18 months since its launch on 15.05.2017," explains Guido Hackl, Director of Air France/KLM in Austria. "I am therefore particularly pleased that we were able to deliver our partner Graz Airport's millionth passenger of 2018.”

As part of his studies in English, Psychology and Philosophy, Mr. Krause spent four months in Canada and has now flown back home to Graz with KLM.

Wolfgang Malik, Chairman of the Board of Holding Graz: "Crossing the million threshold is certainly a very important milestone in the development of the Airport. It also attests to our work in recent years to develop Graz Airport as a transport hub and to position it even better".

Not only Graz Airport has been able to enjoy this special achievement today – just before Christmas: the millionth passenger was presented with a KLM voucher for travel between Graz and Amsterdam, a voucher for the Heinemann Duty Free Shop worth € 200.00 and a Graz Airport watch.

"This is really a very special day for me," says Gerhard Widmann, Managing Director of Graz Airport. "Despite the many ups and downs, we have remained economically successful in the past few years. But crossing this magical threshold is something very special. It's also a wonderful Christmas gift for me personally, and I'd like to thank the staff at Graz Airport!“

We are a million
In 2008, the one million passenger mark was surpassed for the first and so far only time at Graz Airport on December 23: this year, it was December 14. It is therefore safe to assume that Graz Airport will be celebrating the best result in its history by year's end.

Today, both employees and management of Graz Airport are delighted in the knowledge that each and every one of them has made their own contribution, because such successes can only be achieved together.