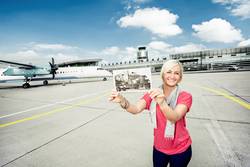 Graz Airport plans six months of events and activities to mark its centenary.

Feldkirchen bei Graz, 22 January 2014: Graz Airport will turn 100 on 26 June 2014. This makes it one of the oldest commercial airports in Austria. To mark this anniversary in a worthy manner, it was decided to pay respect to the past and provide an exciting insight into the presence and the future, even unveiling some unknown facts. The range of events and activities is to officially start tonight with the vernissage of the first exhibition “Graz From a Bird’s Eye Perspective” and will last until the end of June.

Mayor Siegfried Nagl: “Graz Airport is our international gate to the world. When the state of Austria and the province of Styria intended to put the shares on the market, I fought for the city of Graz being granted the right of first refusal. After all, you should always be the gatekeeper of the door to your home. My commitment has long paid off; our airport is modern, appealing and enjoys a sound financial position. The Airport and its staff who do an excellent job every day have the full backing of the Municipality!”

“As owners we are proud of our Graz Airport and of its development from a military airfield to major regional airport, even though we have had only ten years to influence this development”, says Wolfgang Malik, Chairman of the Board of Holding Graz. “The programme for the next few months, which we were pleased to support, will present many different facets, even some less known ones, of Graz Airport and aviation.”

“In our deliberations about the anniversary, we have deliberately decided in favour of a series of smaller events and activities”, Gerhard Widmann, CEO of Graz Airport says. “This is the only way to pay tribute to all aspects of an airport that age. The past, present and future of the Airport and of aviation are all to be put on display and create a single, well-rounded picture.” 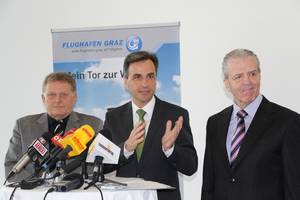 A lot of thinking has been put into the programme over the past few months. How to make sure not to miss out on the past, while at the same time present the Airport as it is now, with all its employees and their manifold tasks, and also provide a look into the future.

100 years are a long time. Two World Wars, economic recession and finally the beginnings of what has become a busy civil airport have left their mark on these one hundred years.

“We have every reason to celebrate; but we are also aware of the historical background of the establishment of the military Thalerhof airport shortly before the outbreak of World War I. All these aspects are to be put on the agenda in these coming months”, Widmann continues.

To offer all the people interested the opportunity to actively contribute to the anniversary programme, two calls for participation were made beginning last year:

The first a creative competition for kindergarten children, young people and school pupils under the title “Graz Airport – a magnet for feelings, desires and dreams”. The competition is organized in cooperation with the School Board for Styria, the Cultural Department of the City of Graz and Kulturvermittlung Steiermark.

The second call was made to all the many people who are interested in the airport. Under the title “Send us your personal GRZ story” the public was called on to contribute special experiences, funny memories, exciting anecdotes or interesting pictures. Great prizes can be won for both activities.

For more information on all events and activities please refer to: http://www.flughafen-graz.at/100jahre

German press release as a PDF with complementary information.