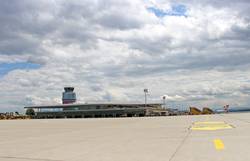 Graz Airport: Third consecutive year with a plus in passenger numbers

Feldkirchen bei Graz, 11/01/2017: With a passenger growth of 1.9%, the airport has produced a respectable result. Due to political unrest in several holiday destinations, the number of charter flights dropped considerably. At the same time, scheduled services were flying high, resulting in the plus in passenger numbers.

"Political unrest and terrorist attacks have had a sustained negative impact on the charter segment. However, due to a strong scheduled flights segment with services to major hubs, we were still able to achieve an increase in passenger numbers – for the third consecutive year," explained Mag. Gerhard Widmann, manager of Graz Airport. "2017 will certainly also not be an easy year. Due to additional scheduled flights to Amsterdam with KLM, however, we continue to be cautiously and watchfully optimistic for the future."

"Graz Airport has been continuously working at expanding the scheduled flights segment," says DI Wolfgang Malik, Chairman of the Board of Holding Graz, representing the airport owners. "This is now paying off. Without the commitment of the airlines operating scheduled flights, we would have seen a decline in passenger numbers in 2016, as have many other airports. Graz Airport is an important asset of the City of Graz and Styria as a whole. For our economy and the tourism industry, the airport is the "door to the world". It plays an important, vital role, and we are proud of it!"

With a total of 981,884 passengers, i.e. 18,488 more than in 2015, we achieved a plus of 1.9%. The development in the scheduled flights segment is in sharp contrast to the charter (holiday) segment. While scheduled flights had an outstanding development with an increase of 8.8%, the charter sector suffered a minus of 30.6%.
As for the scheduled flights, the plus is mainly attributable to the Turkish Airlines service to Istanbul, improved services to Berlin with airberlin, and to a fifth daily rotation to Munich. However, scheduled destinations in general developed positively. The minus in the charter segment is mainly attributable to political unrest in some of the preferred holiday destinations, e.g. Egypt, Tunisia and Turkey.

Development of cargo
9,156.5 tons of cargo were moved (2015: 8,695.7 t). This is an increase in the cargo segment by 5.3%. In addition to the positive development of the economy in the catchment area of our airport, the start of operations of our joint venture with Swissport Cargo Services Graz (a subsidiary of Graz Airport and Swissport International) has without any doubt contributed to this positive development.

Outlook to the summer schedule 2017
The summer flight schedule is still being developed, but many details have already been determined:

To see the current status of our summer flight schedule 2017, starting on Sunday, March 26, please go to: http://www.flughafen-graz.at/flug/flug-reiseinfo/sommerflugplan.html