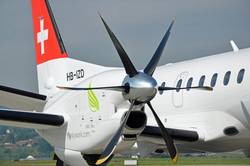 Service to Berlin starts up again

From the end of March, SkyWork Airlines will by flying the route from Graz to Berlin, six times a week.

Feldkirchen bei Graz, 15.11.2017 : On 25th March, at the start of next summer’s timetable, the Swiss airline SkyWork Airlines will start flights on the Graz to Berlin/Tegel route. The service will use a 50-seater Saab 2000.

Martin Inäbnit, CEO SkyWork Airlines: “I am delighted that SkyWork Airlines will now also be operating out of Graz and I am looking forward to a long and profitable partnership. Connecting Austria’s wonderful Styrian state with Germany’s largest city is a great challenge for us and the W-flight matches up exactly with the concept of our growth strategy as laid out in the “SX-GO” project.”

Following airberlin’s sudden withdrawal from the Graz - Berlin route at the end of May of this year, Graz Airport has held intensive discussions with several airlines about the reinstatement of the route.

Governor MMag.a Barbara Eibinger-Miedl: “Germany is Styria’s most important trading partner and when it comes to tourism, our most important market outside of Austria. I am delighted, that after the ending of the airberlin connection to Germany’s capital city, the Graz Airport team, led by Director Gerhard Widmann, has managed to re-establish a direct flight from Styria to Berlin so quickly. This supports our export-based companies and strengthens Styria as a tourism destination!”

Mayor Mag. Siegfried Nagl: “Berlin is a great city and together with Graz, it is a member of the “Creative Cities” network! I am delighted that we now have a daily connection and I also express my thanks to the airport director and his team for their efforts in this respect.”“

Berlin was a permanent and significant part of the timetable for many years,” explains D.I. Wolfgang Malik, CEO of Holding Graz. “And that is why re-establishing the route has had the highest priority for us as the owner’s representative, over the last few months.”

“We have been in regular discussions with SkyWork Airlines over a long time,” says Mag. Gerhard Widmann, Managing Director of Graz Airport, “which has helped to clear the way for the re-establishment of the Berlin connection. I am delighted that we can offer direct flight connections to the German capital once again.”

About SkyWork Airlines AG:
The Swiss regional airline with its headquarters in Bern Airport, operates a year round network of routes to different European cities and additionally in the summer season, it offers scheduled and charter flights to holiday destinations. In 2017, the airline flew to a total of 18 destinations. Four aircraft are used for the current winter timetable and the airline has a workforce of 120.

SkyWork Airlines is going through an expansion phase. A part of this are W-flights, such as the Bern-Berlin-Graz-Berlin-Bern connection.
“FLIGHTS MADE IN SWITZERLAND” is the claim and the mission of SkyWork Airlines and this defines their level of service both on the ground and in the air.

Flights can be booked on www.flyskywork.com from the end of November.