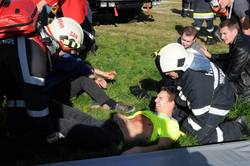 Feldkirchen bei Graz, 18 Oct. 2013: Graz Airport organises a major emergency drill at least once every two years to keep top fit for dealing with any potential disaster. Great attention is paid to ensuring that each drill is different so the men and women involved face ever new challenges. The scenario today was not only that of an aviation disaster but also included an aspect of public security. This brought an entirely new challenge, and not only for the operational commanders. The only way to master today's scenario in a satisfying manner was to ensure perfect coordination, communication and cooperation between all the emergency services participating.

DDr. Burkhard Thierrichter, Chief Officer of the Greater Graz District Authority: "With its scenario, the Alpha 5 emergency drill of Graz Airport is an excellent opportunity to exercise and test the cooperation of security forces, disaster management and civil protection. The drill series of Graz Airport is a role model for all airports and outstanding in its high quality during the preparation phase. This is very reassuring for me, as Chief Officer, because regular, top-quality drills are always the best means to prepare for a real emergency – something we all hope will never occur."

Major General Manfred Komericky, Deputy Director of the Regional Police: "This aviation emergency is an important opportunity for the Styrian Police Headquarters to exercise the transition from the "General Structural Organisation" to "Special Structural Organisation". Other focal elements of the drill are the cooperation with related services (District Authority, airport, etc.) and understanding the interfaces to other organisational units. The scenario is also designed in such a way that we can test the current emergency plans and gain experience concerning the installation of the emergency staff and the integrated sections they are in charge off (path-time diagrams, etc.)."

"With their readiness for today's drill, all the parties involved showed how seriously they are taking the situation", Mag. Gerhard Widmann, CEO of Graz Airport said. "We could make these drills easier for us, but if we did we would not be able to gain experience for the future when we want to be prepared for anything. The objective is not so much to have a perfect, flawless drill but to have a total learning experience so we are always on our toes and can rise to any situation that could possibly confront us." 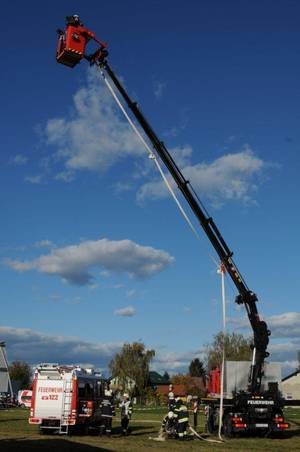 The objectives of the drill:
The objectives of today's drill included, among others, the testing of the alarm plan, internal and external alarms, handling of alarms by the authorities, testing the emergency facilities, information and communication system, and above all the coordination and interaction of all the various authorities, offices and rescue organisations. The drill was also intended to uncover sources of errors, wrong approaches, and excessively complex procedures to either eliminate or simplify them. All the problems discovered will be revised by the parties involved over the next few weeks. And since they are all aware of the importance of this matter and have been cooperating for many years with each other, this revision process will be respectful but also unsparing.

The scenario:
An aircraft approaching Graz gets out of control. Radio contact is lost. When trying to touch down, the aircraft moves off the glide slope and lands on airport territory off the runway, the rear part of the fuselage bursts into flames.
At the same time a business summit is being held in Graz and one of the prime ministers attending it was supposed to fly back home with the aircraft that has crashed. The phone call of a person claiming responsibility and a piece of luggage that has been identified as potentially explosive aggravate the situation even further.