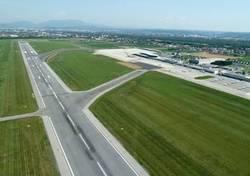 Feldkirchen, 12 July 2012: To ensure optimum use of the runways and swift traffic handling, Graz Airport began the construction of a new, third, taxiway (taxiway C) in March, while at the same time also overhauling the existing taxiways B + D and the apron to meet all safety specifications also in future.

All the building work that had started in March 2012 with the construction of taxiway C has now been completed with the renovation of taxiway B. In total, an area of more than 55,000 m2 has been either newly constructed or improved. Environmentally friendly LEDs of the latest generation are used for beaconing on the new taxiway.

“With the construction and renovation work, Graz Airport has set yet another milestone in terms of safety, environmental compatibility and neighborhood interests”, Wolfgang Malik, Chairman of the Board of Holding Graz, said. “More efficient traffic handling ensured by the new taxiway also means a great improvement for the airlines frequenting our airport.”

The total investment of some 4.6 million euros has been money well spent: Not only the traffic flow, but neighbors and environment, too, profit from the shorter taxi times and reduced waiting time in the air and on the ground.

Peter Matzer, Head of the operating services of Austro Control in Graz: “Any additional taxiway makes it possible for our staff in the tower to move aircraft more quickly from and to the runways – the bottleneck on any airport. The new taxiway C is a further step towards reducing waiting time on the ground and in the air. Linked to that are reduced pollutant and noise emissions. The new taxiway is not only a major step for the airport as a place of business but also for our environment and consequently for all of us.”

“Any construction work on the apron, the taxiways and runways always takes place at the very centre of an airport”, Gerhard Widmann, CEO of Graz Airport said. “We are very pleased to say that the construction work was on time and the cost schedules have also been maintained without any problems. Planning was perfect, the weather was fine and there were no unforeseen events – so no negative effects on flight operations – everything went smoothly.”