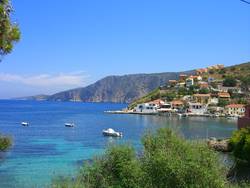 We are ready for summer!

This summer we take off direct to the finest beaches of one ocean and three seas: Tenerife and Madeira on the Atlantic, Hurghada and Sharm el Sheikh on the Red Sea, Bourgas on the Black Sea, and the Mediterranean in a big range of choices including destinations in Spain, Italy, Croatia, Montenegro, Greece, Turkey and Tunisia.
"Bourgas is not entirely new for us, but it was only reached with special flights previously", Gerhard Widmann, CEO of Graz Airport said. “This year we will have a continuous chain of charter flights to this popular holiday destination on the Black Sea every Wednesday and extending all the way through from early July to early September.”
There is news in terms of tour operators as well: Detur Austria has added Graz to its programme.
And back to the Mediterranean: The excellent link to Mallorca with its big airberlin hub for onward destinations throughout Spain and Portugal once again features prominently in the summer flight plan. The popular Balearic Island is served with flights from Graz up to six times a week.

Enormous variety in the special flights program
Tallinn, Vilnius, Bari, Rome, Paris Catania, Dublin, Rennes … these are just a few of the destinations on the plan for this explorer segment. Many of these special flights are also offered in combination with attractive complete travel tours.

The call of distant lands
Around 130 flights a week leave from Graz for important international air transport hubs. These include many same day return air links with flights early in the morning and late in the evening that are equally important for business travellers and tourists. Lufthansa has four flights daily to Frankfurt and also four daily to Munich. Austrian Airlines takes off four times a day to Vienna, and twice daily to Stuttgart and also up to three times a day to Dusseldorf. InterSky flies three times a day to Zurich on weekdays and airberlin flies six times a week to Berlin-Tegel.

Full information on the summer flight plan is available at www.flughafen-graz.at