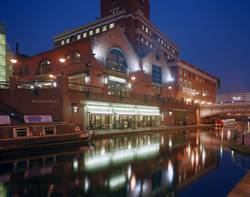 The new airline will connect Graz to new destinations.

Feldkirchen bei Graz, 16/01/2017: The new twice weekly flights between Graz and Birmingham (on Mondays and Fridays) will commence on Monday, February 27, 2017. The frequency is intended to be increased to 4 weekly flights in March. The flights will be operated with a modern 49-seater Embraer 145 Jet. The flight schedule is tailored in particular to the needs of major businesses, a hallmark of bmi regional.

Jochen Schnadt, CCO Chief Commercial Officer of bmi regional: "We are particularly delighted to include Graz as our first destination in Austria from end February, thereby directly connecting the two second-largest cities of Austria and Great Britain. The large affinity of the two cities and regions in terms of economy and industry will set new impulses and open up interesting potentials on both sides. Of course, all of this is only possible thanks to an excellent cooperation with Graz Airport, the municipality, the region and, last but not least, the industry."

The last months were spent discussing, negotiating and, eventually, deciding. In cooperation with the industry, bmi regional, tourism boards and Graz Airport, the start date for the new scheduled service between Graz and Birmingham can now be announced for February 27, 2017.

"The direct service to Birmingham will strengthen the position of Graz Airport as a regional hub and open up new markets for export-oriented companies and tourism!" said Landesrat Dr. Christian Buchmann, expecting huge opportunities for Graz.

Birmingham has a population of more than 1.1 million, making it the second-largest city of Great Britain. It is also the heart of the West Midlands and arguably the home of the "Made in Britain" label. Previously mainly known as a centre of the metal-processing industry, Birmingham has developed to become a modern metropolis with a large number of service businesses. A particularly close connection between Graz and Birmingham is the strong focus on the automotive, rail-car and aviation industry.

Mayor Mag. Siegfried Nagl is pleased: "Our airport will continue on its route to success. The service to the airport of Birmingham in England not only offers us a direct connection to another centre of the automotive industry, but also an almost direct connection to London. A train service connects Birmingham to the centre of the British capital in less than 80 minutes!"

And the trip is even shorter from Birmingham Airport: Birmingham Airport is linked to London by a high-speed train service departing up to 6 times per hour, reaching London in less than 75 minutes. High-speed train services are also available to Manchester and Liverpool. Furthermore, Birmingham is also an ideal starting point for exploring Northern Wales including the Snowdonia National Park, and visiting William Shakespeare's birth- and workplace, Stratford upon Avon.

The shareholder's representative and Chairman of the Board of Holding Graz – Kommunale Dienstleistungen GmbH DI Wolfgang Malik explains: "The example of the new connection to Birmingham underlines, once again, the goal-oriented manner in which the owners and Graz Airport are cooperating. The service to great Britain operated by bmi regional is another milestone for our international airport."

"The creation of the direct service to Birmingham shows what can be achieved if all stakeholders – airline, economy, tourism and airport – entertain a positive, open relationship in working towards a goal," explains Mag. Gerhard Widmann, manager of Graz Airport.

As of now, tickets from Graz to Birmingham can be booked from € 99.00, incl. tax and service fees. The fare includes a baggage allowance of 23 kg plus 12 kg of carry-on baggage, free snacks and drinks on board, 30-minute quick check-in with assigned seats aboard the modern Embraer fleet, offering only aisle and window seats in a 1-2 configuration. Fares are per passenger and can be booked, based on availability, at www.flybmi.com.

About bmi regional:
bmi regional has a jet fleet of 18 aircraft: 14 Embraer 145 and 4 ERJ 135. The airline currently operates 350 scheduled weekly flights to 32 destinations in 11 European countries and employs over 400 members of staff. bmi received the Munich Exchange Award in 2015 and also in September 2016. The airline's route network includes Oslo and Stavanger in Norway, Brussels in Belgium, Esbjerg in Denmark, Bremen, Rostock, Frankfurt, Hamburg, Dusseldorf, Munich and Nuremberg in Germany, Milan Bergamo and Milan Malpensa in Italy, Graz in Austria, Paris and Toulouse in France, Brno in the Czech Republic, Rotterdam in the Netherlands, Norrkoping, Karlstad, Jonkoping and Goteborg in Sweden as well as Aberdeen, Birmingham, Bristol, East Midlands, Newcastle, Norwich and Southampton in Great Britain.

Departure and arrival times from February 27, 2017:

Tickets are available for booking from Tuesday, January 17, 2017, at www.flybmi.com.