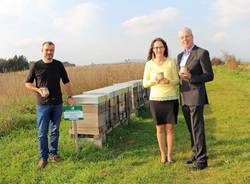 The colonies that have been living at Graz Airport since May 2017 not only produce a healthy honey but also an award-winning one, as confirmed on 13/10/2018.

Feldkirchen bei Graz, 16 October 2018: Last weekend, the honey produced by Graz Airport’s bees was awarded a silver medal in the linden honey category by the Styrian Apiculture Association in the framework of its annual honey awards, representing another proof of its high quality following a laboratory assessment in June 2018 that did fail to detect any environmental contamination.

South of Graz Airport has seen a special kind and particularly heavy air traffic since 2017. Here, up to 400,000 honey bees are hard at work. And to support them in the best possible way, Graz Airport has commissioned Master Beekeeper Mag. Dr. Michael Rubinigg who has been taking care of the bees with his wealth of knowledge and lots of passion every since. “When you work with bees it doesn’t matter if the hives are located on airport grounds or not,” says Dr. Michael Rubinigg. “It makes it special for me, however, and it makes me proud that our honey has been awarded after such a short period of time!”

Natural bioindicators
Bees are living ‘bio-detectives’ that clearly show the air and water quality as well as the fertiliser load in their environment. This is why the bees’ honey was examined for many contaminants in June 2018, including some that are created by air traffic (various organic and inorganic substances such as heavy metals and polycyclic hydrocarbons). The assessment failed to detect any contamination attributable to air traffic.

“Here at the airport we love this project that was initiated by our employee Alexandra Eller and further developed in cooperation with other colleagues,” says Mag. Gerhard Widmann, Managing Director of Graz Airport. “For one because it allows us to judge our success directly on the basis of the honey’s quality and quantity and secondly, because it shows that the airport or air traffic has no detectable negative effects on the immediate vicinity of the airport.”

Airport bees guarantee heavy air traffic
8 beehives have been in operation south of the airport since summer 2017 – depending on the season and strength, with 10,000 to 50,000 adult worker bees per colony as well as a 80,000 (winter) and 400,000 (early May) workers in total.
In 2018, some 300 kg of honey was harvested exclusively from the airport’s vicinity (radius of approx. 3 km around the apiary).

300 kg of honey produced on airport grounds – a surprise natural treasure
Among others, Graz Airport’s grounds include some 230 hectares of grasslands. This means that an entire region’s largest continuous grassland area is located on its business premises. Thanks to the fact that (except for a few exceptions) it is only mowed 2 or 3 times a year and has not been fertilised for a while, it is available as a special and rare habitat to many animal and plant species.