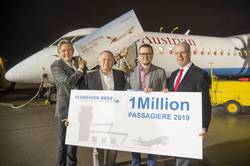 Graz Airport has again welcomed its millionth passenger in a single year - and hit this milestone on the earliest date yet. 2019 could prove to be a new record year in terms of passengers.

On the earliest date yet, for the second year in a row and for the third time in the history of Graz Airport, the millionth passenger of the year was welcomed at the airport on 9 December. This underlines the positive development of the airport as a transportation hub.

Millionth passenger given a good send-off

Wolfgang Schiefer, the millionth air passenger this year, was given a friendly and memorable send-off by Wolfgang Malik, Bernhard Hamela and Gerhard Widmann prior to taking off for Düsseldorf. For not only Graz Airport, but Mr Schiefer himself had grounds for celebration. To his surprise and delight, he was presented with a voucher for Austrian Airlines’ European network, a gift voucher worth € 200 for the Heinemann Duty Free Shop and a Graz Airport watch.

Graz Airport recorded a total of 1,030,929 passengers in 2018, which was the best passenger result in its history to date. It is anticipated that this number will be exceeded in 2019.

You can get further details and comments from press release.